Turkey Tests the Waters in the Eastern Mediterranean

Reprinted with permission from Geopolitical Futures.

Turkey is seeking to rewrite the rules in the Eastern Mediterranean. Last week, the Turkish government signed a maritime agreement with one of Libya’s two aspiring governments that strengthens Turkey’s position in the region. While legally ambiguous and fraught with logistical challenges, the deal represents Turkey’s latest effort to assert its dominance in the Eastern Mediterranean, to capitalize on the region’s energy resources and to restore the regional influence it lost over a century ago when the Ottoman Empire fell.

Catching Up in the Energy Race

We wrote earlier this week about how Ankara was trying to create a buffer for itself to the south, with Operation Peace Spring in northeastern Syria. Turkey’s efforts in the waters to its west have some related motivations, but they’re also about cashing in on the Eastern Mediterranean’s natural resources. For decades, Turkey has been excluded from benefiting from the oil and gas boom in the Eastern Mediterranean, which has an estimated 3.5 trillion cubic meters of natural gas and 1.7 billion barrels of crude oil. Greece, Cyprus, Egypt and Israel have been quicker and more successful than Turkey in identifying oil and gas fields along their coasts. After Israel identified two natural gas fields in 1999, for example, its government, alongside those in Greece, Cyprus and Egypt, was quick in the early 2000s to reach agreements delineating exclusive economic zones and to launch hydrocarbon exploratory patrols with multinational companies. This enables those countries not only to benefit financially from the discoveries but also to improve their energy independence.

Turkey has struggled to match its Mediterranean peers. Its seismic surveying vessels and deep-sea drills have cost Ankara over $1 billion in the past decade, and yet they have not yielded any oil or gas discoveries. Apparently devoid of such resources along its 994-mile (1,600-kilometer) Mediterranean coastline and with growing demand for and dependence on imported oil and gas, Turkey has been compelled to drill in waters that neighboring governments, namely Greece and Greek Cyprus, argue are part of their sovereign EEZs.

Of course, this isn’t just about fossil fuels. The rivalries in this region are long-standing, and countries like Greece are unenthused by the prospect of an old foe reemerging. Ankara’s historical claims in the Aegean Sea and on Cyprus and certain Greek islands have alarmed its Mediterranean neighbors. Moreover, Turkey is not party to major international maritime legal agreements, such as the U.N. Convention on the Law of the Sea, giving it leeway in redefining economic zones and territorial waters in the region. Greece and other Mediterranean powers have forged a regional strategy to box Turkey out of their economic projects and regional collaborative frameworks. Take, for example, the EastMed Pipeline, a $7.36 billion underwater natural gas pipeline that will ship gas from Israeli and Cypriot fields across Cyprus and Greece to interconnector terminals in Italy. EastMed will attract lucrative gas export agreements in Europe, where the demand for energy is rising. Despite Turkish interests in the pipeline and the fact that the project intersects with Turkish waters, Mediterranean governments have shut Ankara out, perceiving it as an unwelcome rival – even after Turkey offered to offset the pipeline’s underwater costs by having it run overland through Turkish territory (which would, admittedly, increase Turkey’s leverage over gas transmission). Additionally, Israel, Egypt, the Palestinian territories, Jordan, Greece and Cyprus excluded Turkey from the Eastern Mediterranean Gas Forum, a cooperative platform for dialogue on natural resources. Turkey has therefore devised a counterstrategy to get on its rivals’ level as a Mediterranean power, becoming increasingly assertive in what it sees as its historical and legitimate territory.

On Nov. 27, Turkish President Recep Tayyip Erdogan met for two hours with the head of the U.N.-backed Libyan Government of National Accord, Fayez Sarraj. They emerged with two memorandums of understanding, one on security and military cooperation and another called the “Restriction of Maritime Jurisdictions.” Turkey has backed the GNA for years, partly because of its interest in Libya’s oil reserves – estimated to be the largest in Africa and the 10th-largest globally – and partly to counter its Arab and other adversaries (including Saudi Arabia, Egypt and Russia), which back the opposite side in the Libyan conflict, the Libyan National Army. In this respect, the Turkey-GNA defense agreement is no surprise; Ankara has a history of providing Sarraj’s forces with drones, military equipment and financial resources to counter Khalifa Haftar’s LNA in eastern Libya. However, it is the maritime agreement that demands special attention. The agreement demarcates new, “equitable” maritime zones, on which both sides exercise sovereignty. The Turkish government hinted that the maritime deal would lead to lucrative oil and gas contracts off the Libyan coast, hydrocarbon exploration activities that would also support Libya’s economic recovery after its civil war, and even a Turkish base in western Libya to increase security cooperation. 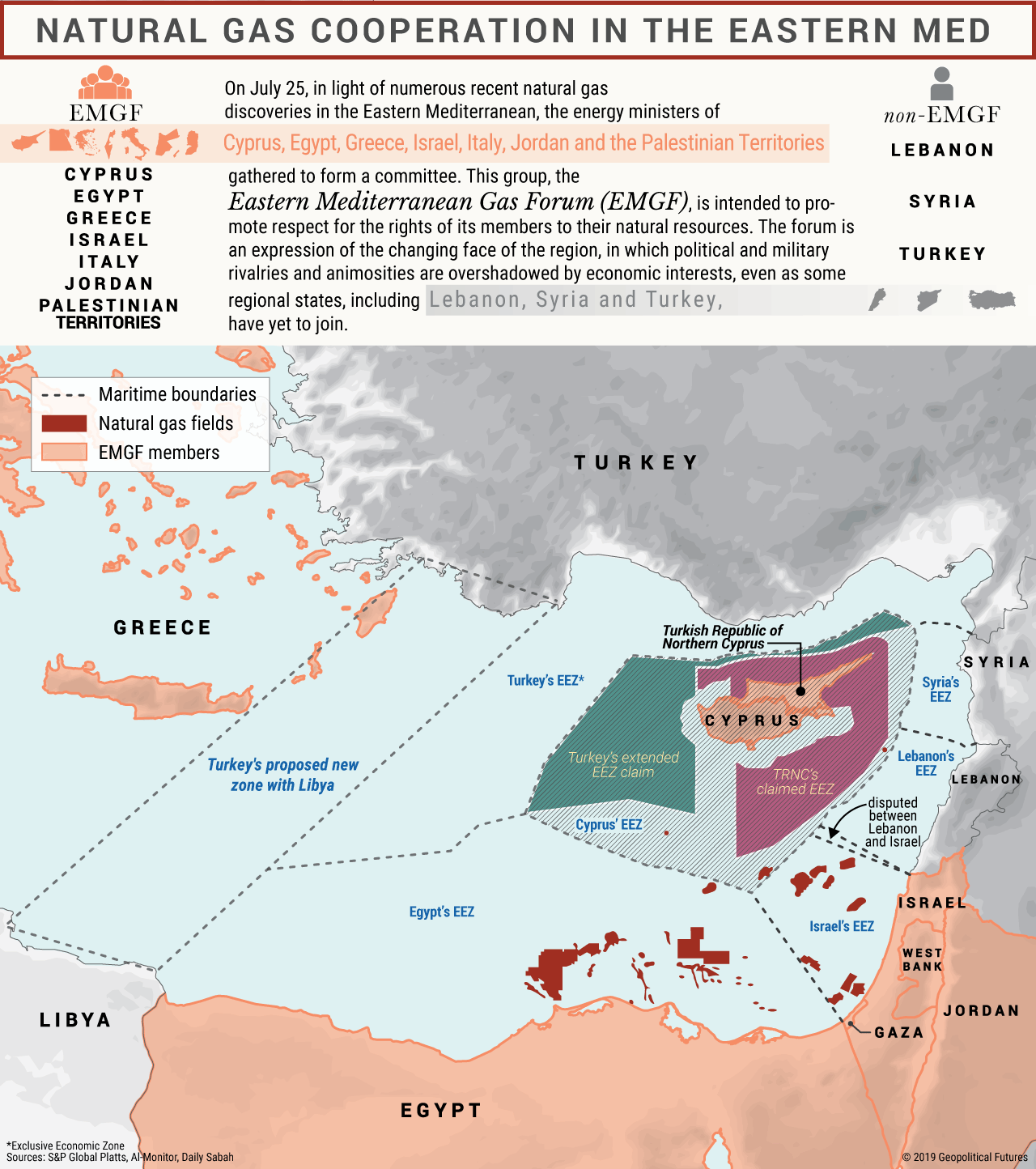 A Turkish diplomat released a map on Twitter shortly after the deal was forged, outlining Turkey’s revised EEZ and continental coastline (augmented by 30 percent). The new EEZ links up with Libya’s EEZ, which was a strategic maneuver. On paper, the revised zone bifurcates Greece’s EEZ by cutting across Crete’s EEZ, and if enforced, it would effectively undercut any Greek attempt to forge its own delimitation agreements with Egypt, Israel and Cyprus. The deal also attempts to undermine the EastMed Pipeline, which marginalizes Turkey’s regional strategy by cutting through its territorial waters and excluding it from export sales. The maritime deal enables Turkey to augment its maritime control in zones where the underwater pipeline is planned, threatening the pipeline’s construction and operation. But more significantly, the maritime deal offers Turkey greater strategic depth, from North Africa to the Aegean Sea to the Gulf of Antalya, and it challenges Turkey’s adversaries to respond to its reinterpretation of its sovereign maritime boundaries.

Turkey’s strategy in the Mediterranean rests on two approaches. First, the Turkish government knows that it cannot match its adversaries and break out of its isolation alone, so it has sought out and found two partners in the region: the Turkish Republic of Northern Cyprus and the Libyan GNA. These allies are feeble, but that makes them exploitable, and for Turkey that’s part of the appeal. The TRNC quite literally depends on Turkish support for its existence. The GNA’s enemy has the support of Saudi Arabia, Russia and Egypt – some of Turkey’s greatest rivals. Despite stepping up oil production and making progress toward resolving the country’s liquidity crisis, the GNA has struggled to maintain control over key economic sectors and militia groups, which are rampant in the country. Furthermore, wavering American support for the GNA and indications of support for Haftar have left Sarraj’s government insecure. Turkey deliberately accompanied the maritime deal with a series of security promises that gave Turkey rights to coastal Libyan drilling fields and authorized an enlarged Turkish naval presence at Libyan ports. It is important to note, however, that the revised EEZ was demarcated along coastal areas outside of the GNA’s control, which will be a logistical challenge for Turkey. This situation could exacerbate the civil war and prove to be a significant flashpoint, where Turkey will seek to strong-arm the GNA and Egypt, and Eastern Mediterranean allies will be more motivated to support LNA forces.

The second element of Turkey’s Mediterranean strategy relies on the use of a historical narrative to assert Turkish rights in the region. Turkish officials have begun to reference the “Blue Homeland,” the concept that the eastern coast of Crete and half of the Aegean Sea – nearly 18,000 square miles – belong to Turkey. The Blue Homeland is popular among neo-Ottomanists in Erdogan’s Justice and Development Party, as it harkens back to the peak of the empire’s geopolitical power. Erdogan even posed in front of a map of the Blue Homeland when presenting at the National Defense University. Of course, Ankara is aware that such concepts violate Greek sovereignty and that any attempt at military consolidation could spark an international crisis. But legality is beside the point – Turkey’s ultimate objective is psychological: imposing permanent Turkish influence in the region and notifying its Mediterranean peers that it is here to stay.

Turkey’s agreement with Libya has sparked outrage among its Mediterranean rivals, who accuse Ankara of violating the Convention on the Law of the Sea and the jurisprudence of existing EEZs. Regional governments have been quick to dismiss the deal as legally invalid and “ridiculous,” and questions have been raised about whether the GNA was even empowered to make the deal in the first place, since Sarraj does not have the legal authority to sign any accord outside the scope and purview of the U.N.-brokered Skhirat Agreement that established the government. But Greece and Cyprus have expressed deep concern about the possible ramifications of the maritime deal. Cyprus has appealed to the International Court of Justice to help it defend its claims to its offshore natural resources. Greece has launched a campaign to garner support from the West, making appeals to both the European Union and NATO, as well as accelerating negotiations with Egypt on their own EEZ delimitation agreement.

Turkey’s strategy in the Eastern Mediterranean is about shifting the balance with regional powers and asserting a new psychological reality regarding Turkish influence and sovereign rights in the region. It fits well into Turkey’s broader ambition to develop a bolder, more visible,self-sufficient foreign policy. This policy has Ankara probing in the Balkans, Central Asia, the Levant and the Caucasus, but the Eastern Mediterranean will continue to be where Turkey is playing its most high-stakes game.