As is often the case with the European Union, negotiations over the EU’s next long-term budget have so far produced more meetings and debates than concrete solutions. Talks over the 2021-27 budget, referred to within the bloc as the multiannual financial framework, have revealed not only the state of the EU’s internal divisions but also the depth of the problems it currently faces.

Negotiations have been further complicated by Brexit, of course, but the drama also revolves around disagreements between some of the EU’s core members. Germany and France continue to debate what the EU’s priorities should be going forward. And based on their conduct during the negotiations, it’s clear that their focus is increasingly shifting away from the EU’s traditional areas of concern, including supporting its poorer member states, in favor of more modern priorities and, of course, their own economic well-being. This reveals the fragility of the EU’s core.

Through the seven-year budget, the EU will define its long-term development strategy, so in a sense, the current negotiations aren’t about money but about the basic principles the union wants to promote. The EU’s budget has always been geared toward supporting big political projects: the single market in the 1980s, the adoption of the euro in the 1990s, the enlargement process in the first decade of the 2000s. Over the past decade, it was focused on helping the bloc’s economies recover from the 2008 financial crisis to bolster EU cohesion at a time when the bloc could have easily ruptured under the strain of economic meltdown.

Now that the EU is facing the departure of one of its members, not to mention an increasingly challenging global environment, it needs another big political project to help unite its remaining parts. To that end, the European Commission, which initiates discussions on the long-term budget, has submitted two major ideas for consideration by the EU Council, which is responsible for approving the new framework. One is the Green Deal, a plan to make the EU carbon neutral by 2050. The other project attempts to boost the EU’s global profile and is focused on defense and security. Though the two plans aren’t incompatible, they promote competing visions for the EU’s future. In times of economic growth, the bloc could pursue both, but these are uncertain times, and given that some member states are loathe to spend more money on EU projects than they already do, the bloc will likely have to choose between the two projects.

The Green Deal’s biggest backer is Germany, but it’s also supported by countries such as Austria and Luxembourg that produce relatively high amounts of green energy and thus want to support funding for modern infrastructure that can help distribute this energy throughout Europe. At its core, the Green Deal seeks to promote environmentally friendly initiatives and clean energy. One of the first steps toward this vision was meant to be a sustainable finance strategy, which the European Commission hoped to secure in December. Energy producers, however, rejected the first draft of the proposal because it excluded nuclear energy and natural gas as well as other fossil fuels from the list of green activities that would be eligible for EU funding. France, the Czech Republic, Hungary, Poland, Slovakia, Romania, Bulgaria and Slovenia – countries that depend on these sources of energy – also rejected the initial proposal, though the EU later agreed to include nuclear as a clean source. 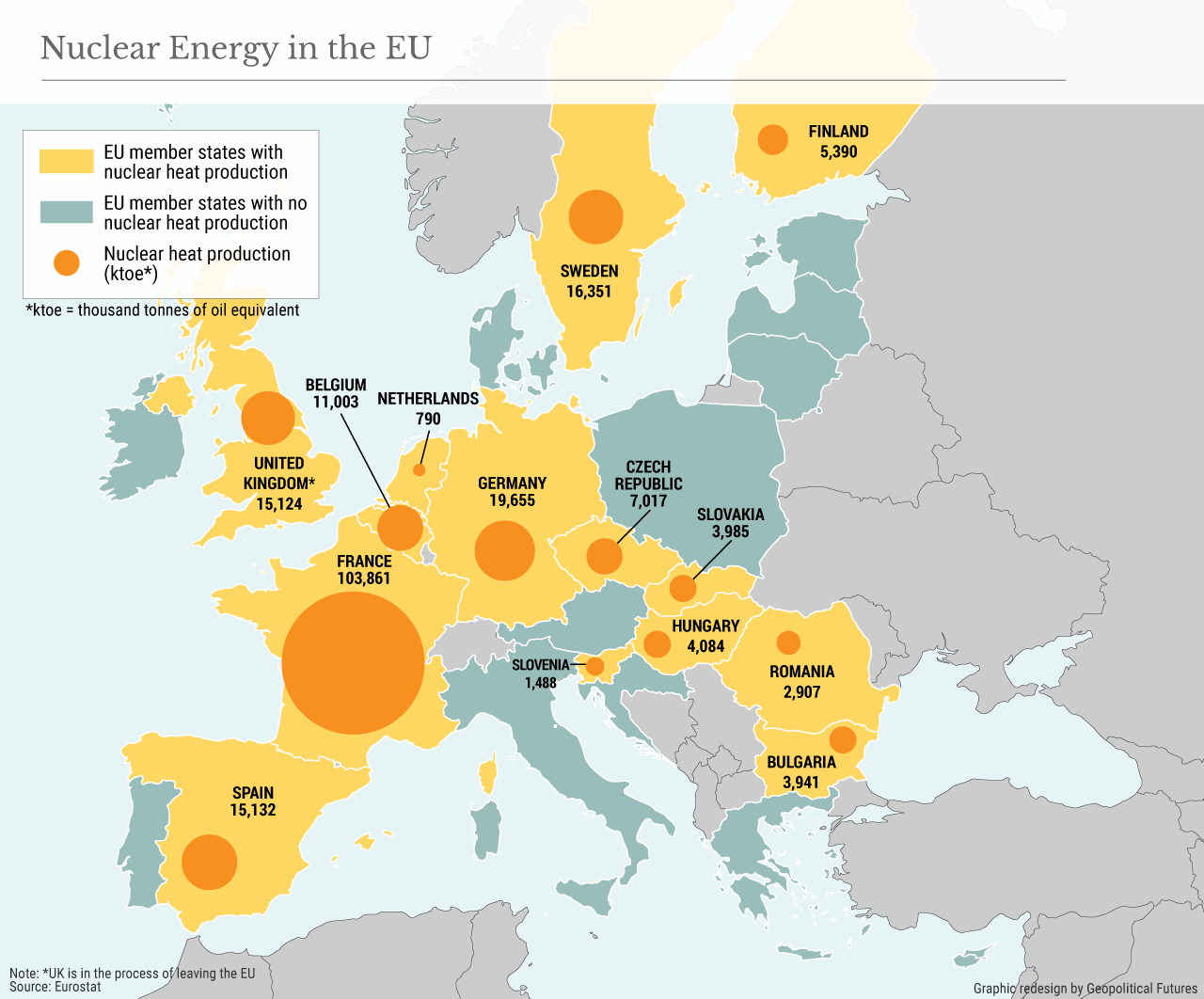 Talks on the Green Deal have also triggered discussions over how the EU defines “projects of common interest” that are financed through EU funds – especially as they pertain to energy infrastructure. So, if European-produced natural gas is not considered eco-friendly under the Green Deal, infrastructure that supports the production and distribution of this energy source will no longer be eligible for European funding. Eastern European countries like Romania and Poland that want to avoid relying on Russian energy are naturally opposed to such a narrowly defined criteria of green energy. Germany, on the other hand, is the Continent’s largest producer of renewable energy and therefore has no problem with limiting funding to renewable energy. While it’s also a supporter of the Nord Stream 2 pipeline, which will deliver Russian natural gas to European markets, the new regulations will not affect the pipeline’s construction.

Considering the Green Deal’s zero tolerance for coal, Poland and Romania may have to face the prospect of moving away from coal mining, which will come with its own consequences for the local population, without any support from the EU. Similarly, France, the largest European producer of nuclear energy, has been reluctant to exclude nuclear projects from EU funding, hence why French President Emmanuel Macron has been raising the nuclear issue every chance he gets lately.

France is the biggest supporter of the other major project competing for EU funds, dubbed Geopolitical Europe, or “L’Europe Geopolitique” as it was originally called. As part of this vision, Macron has been pushing for more spending on defense and security, focused on border control and research and development. Not coincidentally, France has a large defense industry and wants to increase production and export of its own military goods. It even sees Russia as a potential partner in this regard.

France has also supported measures to increase member states’ joint contributions to the EU budget to over 1 percent of the EU’s gross national income, which, according to Macron, would allow the EU to expand its global presence and eventually increase its export potential. Net contributors Denmark, Sweden, Austria and the Netherlands – the so-called frugal four – want to cap contributions at 1 percent, while Germany has agreed to a slight increase above 1 percent. 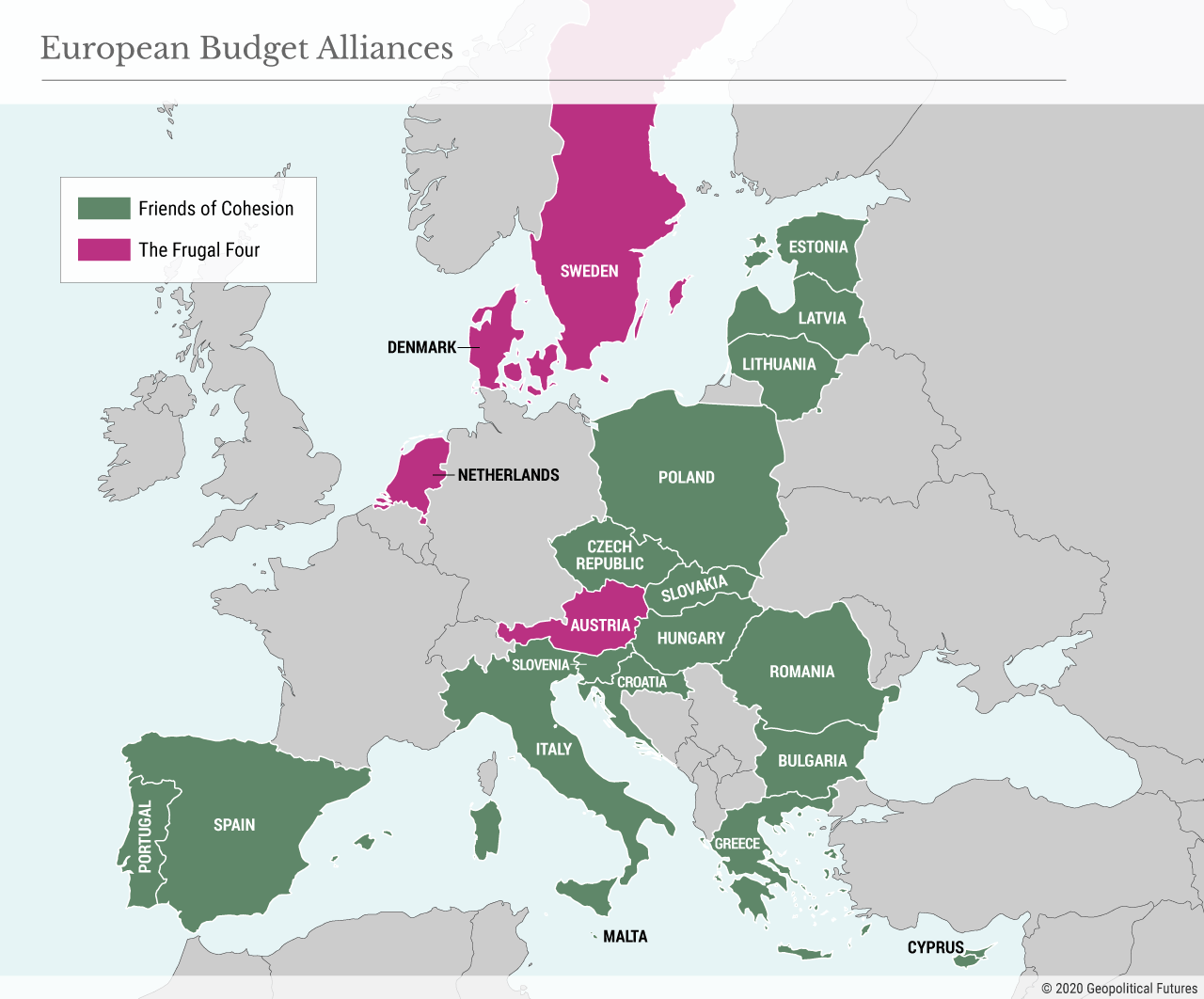 The EU’s non-frugal members, especially France, have also suggested eliminating rebates – a partial refund given to net contributors. The frugal four plus Germany want to keep their rebates. This will be one of the most contentious budget issues – particularly for Germany, where the electorate is increasingly frustrated that their country is expected to carry a larger burden for funding the EU than other members.

The main divide over the long-term budget is between the bloc’s two leading members: Germany, which is Europe’s economic powerhouse and wants the EU to continue to work to its advantage, and France, which sees an opportunity with Britain’s exit to shape the EU to its own benefit.

But there are splits among other members of the bloc too, due in part to proposed cuts to cohesion funds and agriculture funds, both of which could be cut by over 10 percent in the upcoming budget. Eastern European members have benefited most from cohesion funding, which has helped build new infrastructure and reform public sectors. (Eighty-five percent of public funds in Eastern European member states are financed by EU money.) In addition, since the 2008 economic crisis, the economies of Southern Europe have been kept alive by cohesion and agriculture funds from the EU. Therefore, Bulgaria, Croatia, Cyprus, the Czech Republic, Estonia, Greece, Hungary, Italy, Latvia, Lithuania, Malta, Poland, Portugal, Romania, Slovakia, Slovenia and Spain – the so-called “friends of cohesion” – are campaigning to reduce these cuts.

The recent focus on the budget, however, has overshadowed another major problem for the EU: competitiveness. While Europe has some of the best education systems in the world, it has become increasingly hard to translate it into skills that generate profitable economic activities and innovation. This is in part due to advantages given to people with seniority over younger, less experienced job seekers. It is also due to generous and overly burdened pension systems that governments are compelled to support or, if they don’t, face widespread public backlash. European economies are also generally geared toward old industries and state involvement, rather than innovation and new industry. Even the European Commission’s plans to support digitization and innovation through funds that would be administers by the states highlight the government-centric nature of Europe.

Europe, moreover, faces some major problems outside its borders that have not been addressed in discussions over the budget. While the Geopolitical Europe project focuses on building Europe’s military capabilities, it doesn’t indicate what threats they’re meant to address. Not that there aren’t plenty to choose from. Russia is still a threat on Europe’s eastern frontier, and Turkey is slowly becoming a regional power having recently partnered with Russia both in the Middle East and in North Africa in operations that could threaten European energy supplies and send more migrants to the Continent’s shores.

The consequences of these threats will be felt most by Eastern European countries, which are increasingly turning to each other and the United States in the belief that Western Europe is reluctant to respond to their concerns. Regional alliances are therefore emerging: Central Europe has the Visegrad Group, while Eastern Europe has the Intermarium and the Three Seas initiative.

These new groupings see the U.S. as an alternative source of support and funding. On Feb. 15, during the Munich Security Conference, U.S. Secretary of State Mike Pompeo said Washington would pledge up to $1 billion for energy projects in Eastern Europe to help reduce the region’s reliance on Russian natural gas. Pompeo’s announcement highlights the divisions between Eastern and Western Europe, and reveals how the United States’ priorities on the Continent differ from those of Western European states. It also shows that the EU’s eastern member states continue to hedge their bets and increasingly seem to trust the U.S. more than they trust Brussels when it comes to their security needs. The talks over the EU’s budget will continue to highlight these divisions, as member states face tough choices over how best to protect their interests, both within and outside of the EU.