The Most Important Coronavirus Question

The first person to die from coronavirus on American soil passed away on Feb. 29 at a Seattle area hospital – incidentally, the same hospital where my daughter was born just ten and a half months ago.

For epidemiologists, the most important unanswered question about the Wuhan coronavirus, or COVID-19, is the case-fatality rate. But for the general public, the question is much more personal: “Might I – or anyone I love – get sick and die?” When faced with uncertainty, people make decisions cautiously, and they base them on emotion and personal experience instead of statistics. If enough people answer “Yes,” there could be major repercussions as panic sets in around the world. Small behavioral modifications, such as telecommuting or reducing factory activity to avoid spreading the disease, made by millions of people can have a large impact. The United Nations already estimated $50 billion worth of exports worldwide will be affected, excluding non-trade economic activities such as travel tourism, as manufacturing slows and governments impose measures like port restrictions. This is why it is necessary to develop a “risk of death” profile for COVID-19.

The first substantial effort to do just that was published by the Chinese Center for Disease Control and Prevention. Though these numbers should be thought of as preliminary (and perhaps specific to only China), they allow us to begin to comprehend the risk that our global society is facing. After analyzing 44,672 confirmed cases, Chinese health officials estimated the case-fatality rates by age group: 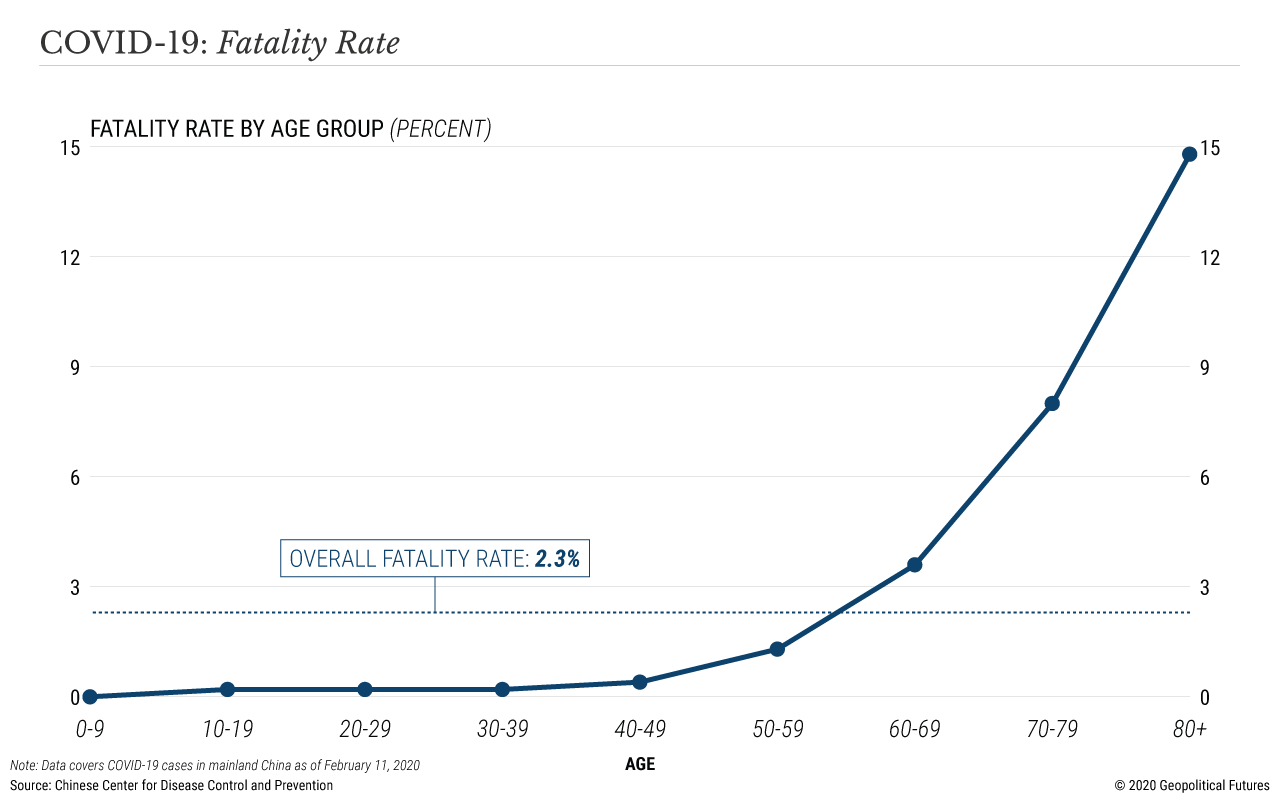 The virus can be lethal in a variety of ways. Viral infections in the lungs can trigger an immune response so strong that it fatally damages the lungs. In others, a systemic immune response, called a “cytokine storm,” can cause multiple organ failure. This could explain why some young, healthy people are killed by the virus, such as Dr. Li Wenliang, the 34-year-old doctor who died shortly after alerting the world to this new strain of coronavirus. An older person’s immune system may not be able to fight a respiratory virus. Underlying conditions such as high blood pressure or diabetes can worsen outcomes.

The above statistics are no doubt frightening numbers. But there are at least three major mitigating factors. First, the number of mild or asymptomatic cases is unknown and probably substantial. Second, China is still a poor country with low-quality health care and, at the epicenter of the outbreak in Hubei province, was overwhelmed by the virus. (The case-fatality rate in Chinese provinces outside Hubei, where hospitals aren’t overloaded, is much lower.) Third, smoking is much more prevalent in China than America, especially among men (52 percent in China versus 16 percent in the U.S.), and smoking is a risk factor for poor responses to respiratory infections. Together, this means the case-fatality rate is likely inflated, and it would be a mistake to apply these figures to the United States or other advanced nations.

The real question, then, is how inflated the case-fatality rates are. At this point, it’s impossible to determine because scientists are still collecting data on how widespread the virus is. But to get a sense of how exaggerated these numbers might be, it is useful to examine the case-fatality rate for seasonal influenza. For the 2018-19 influenza season, the U.S. Center for Disease Control and Prevention provides estimates for the number of cases (defined here as “symptomatic illnesses”) and deaths. From these, we can derive case-fatality rate estimates by age group. 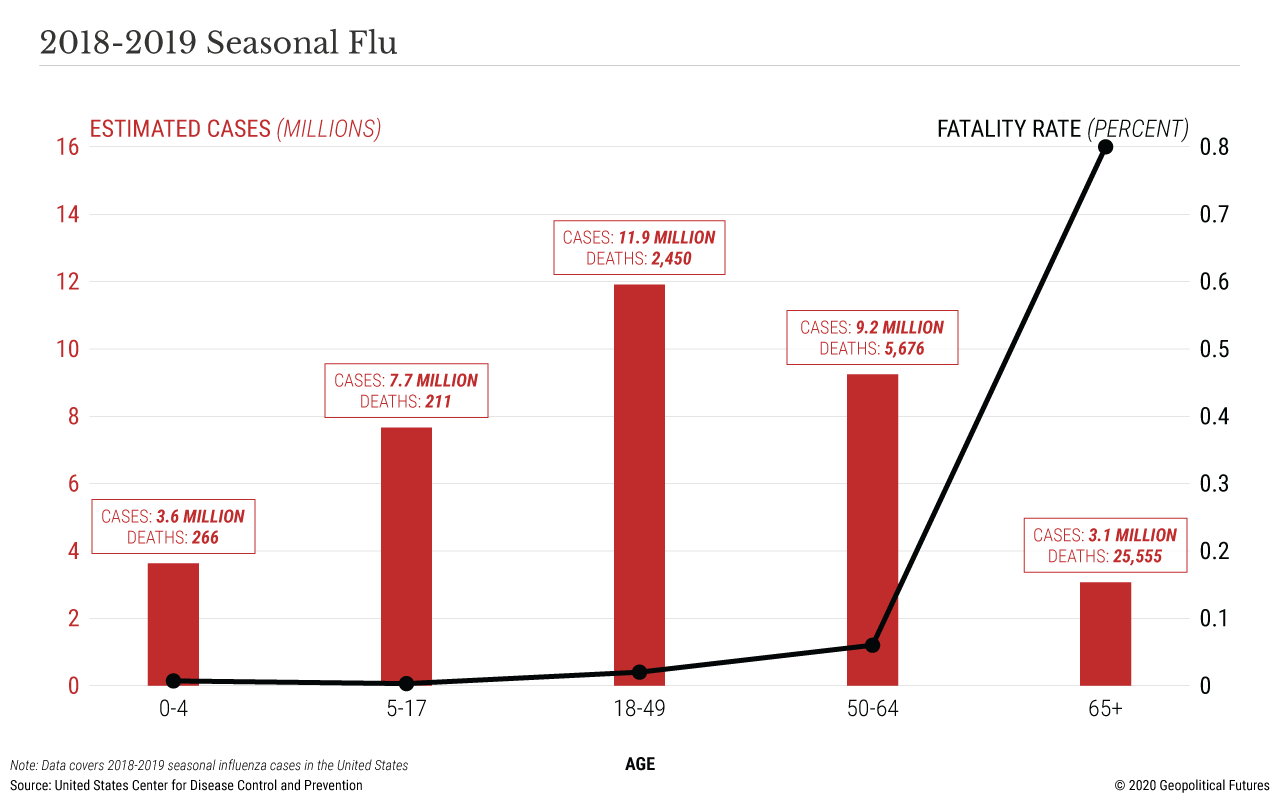 If COVID-19 ends up being similar to seasonal influenza, then the case-fatality rates for COVID-19 are inflated by a factor of 20 to 100. Dr. Anthony Fauci, head of the U.S. NIAID, co-authored an editorial for the New England Journal of Medicine in which he wrote:

“If one assumes that the number of asymptomatic or minimally symptomatic cases is several times as high as the number of reported cases, the case fatality rate may be considerably less than 1%. This suggests that the overall clinical consequences of Covid-19 may ultimately be more akin to those of a severe seasonal influenza(which has a case fatality rate of approximately 0.1%) or a pandemic influenza(similar to those in 1957 and 1968) rather than a disease similar to SARS or MERS, which have had case fatality rates of 9 to 10% and 36%, respectively [emphasis added].”

We have reason to believe this view is closest to reality. In South Korea, public health officials screened about 100,000 people and detected over 7,300 cases. So far, the death toll is 50, which translates to a case-fatality rate of 0.7 percent. That’s still seven times worse than seasonal flu, but it’s far lower than the initial reports from China. 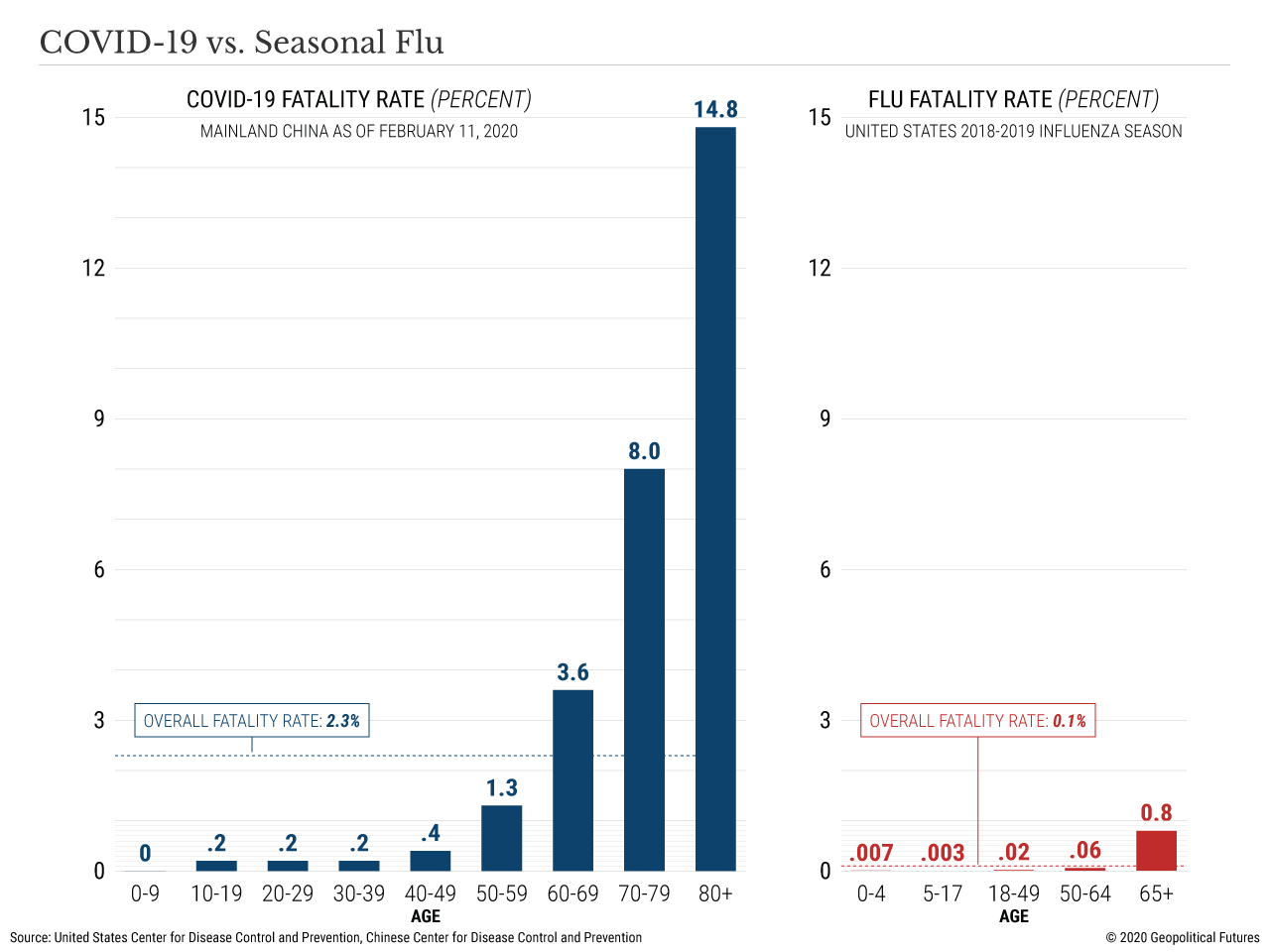 The Future of COVID-19

Stat News describes two possible scenarios that epidemiologists envision for the future of COVID-19. In the first, COVID-19 becomes just another cold virus, and possibly evolves to become less lethal as well. What we call the “common cold” is actually caused by roughly 200 different viruses. Each year, about 25 percent of common colds are due to four coronaviruses, and some scientists think COVID-19 could eventually join this group as its fifth member. In the second scenario, COVID-19 behaves more like a severe seasonal flu, vanishing in the summer and returning to hit us hard in the winter.

In neither scenario does COVID-19 resemble the Spanish flu of 1918, which disproportionately killed young people. In neither scenario does the virus mutate to become more lethal. Most likely, the opposite will be true. There is an inverse relationship between lethality and contagiousness; that is, the most contagious viruses tend to be less lethal. Evolutionary pressures – namely, the biological imperative to reproduce as far and wide as possible (which means not killing people) – may push COVID-19 down this path.

For now, influenza remains the far bigger global public health threat. Each year, about 1 billion people become infected with seasonal flu, killing some 300,000 to 500,000. This season alone (2019-20), about 20,000 Americans have died from flu, including 136 children. Yet, very few people fear the flu. Society has accepted it as part of reality, and people carry about their daily lives without excessive concern over influenza. This is the likely future for COVID-19.

Until then, perhaps the last word should be given to virologist Dr. Lisa Gralinski, who told The Scientist, “If you’re over fifty or sixty and you have some other health issues and if you’re unlucky enough to be exposed to this virus, it could be very bad.” While everyone else should remain vigilant and take proper precautions (e.g., washing hands and avoiding crowds) until more data comes in, from a scientific perspective the public alarm is disproportionate to the risk.