Sign In | Subscribe Ad-Free
up next:
now reading: The Next Phase of China’s Fight with the Coronavirus

The Next Phase of China’s Fight with the Coronavirus

The Communist Party of China would like you to know it’s winning the war against the coronavirus, and that we all have Xi Jinping to thank. That’s been the core message from Chinese state media over the past few weeks, which marked a major turning point in the crisis. Internally, China’s massive mobilization against the virus appears to have stemmed the tide, with new infections slowing to single digits and Chinese industry gingerly getting back to work. And as the outbreak became a pandemic, Western governments’ spotty responses have put both Beijing’s early missteps and its later successes in a more favorable light.

It’s been a boon to Beijing’s propagandists, who can now call attention to China’s triumphs and the world’s woes. Their messaging has also made it clear that Xi and his inner circle will emerge from the public health crisis intact – and perhaps even stronger. Xi has commanded the decisive battles in the “People’s War” against an invisible enemy, at least according to state media hell-bent on elevating the president to almost Mao-like status.

But if Xi is safe on his throne, his realm is not. The Chinese economy is, to put it plainly, in really bad shape. Nearly every problem Beijing couldn’t figure out how to fix has been made an order of magnitude worse by the coronavirus crisis. And while the virus going global may be a shot in the arm for China’s hype machine, its spread may very well shut down the country’s most promising roads to a rapid recovery.

A month ago, the CPC was reeling. The epidemic had become nearly uncontainable, and Xi’s tightly centralized decision-making structure and a culture of censorship were at least partially to blame. This created pressure both at home and abroad, forcing Beijing to implement a twist on Mao’s Hundred Flowers Campaign and relax the restrictions on independent reporting and to censor social media with a lighter touch. The outrage that followed, particularly after the death of whistleblowing doctor Li Wenliang, scared Beijing, forcing it into a series of clumsy moves to squelch dissent. Beijing was also forced to postpone its annual National People’s Congress, which the CPC relies on to align the machinery of the state with its agenda. For much of this time, Xi himself was conspicuously absent from the spotlight. When the central government finally launched a campaign to demonstrate its command of the crisis response, it was led not by Xi but by Premier Li Keqiang, the closest thing Xi has to a rival in the Politburo Standing Committee. But as soon as the outbreak looked like it would soon crest in early February, Xi was firmly back out in front.

The pillars of power in China are often described as “the three Ps”: the People’s Liberation Army, personnel and propaganda. And by becoming the public face of the government’s response, Xi has demonstrated his control over each of them. In early February, he deployed the PLA, which answers directly to him as chairman of the Central Military Commission and had been noticeably absent from the response in January, to build hospitals, transport supplies, ensure public order and dispatch medics to the front lines in Wuhan. If Xi were losing control over key personnel appointments, he wouldn’t have been able to replace the party leadership in Hubei province with a pair of loyalists. Finally, the propaganda machine has gone into overdrive in lionizing the president. State media has begun referring to the president as “the People’s Leader” and, particularly during Xi’s long-awaited visit Wuhan this week, equating his leadership in the fight against coronavirus to Mao’s command of the Communist Party’s civil war victory in 1949. This matters more than mere symbolism. By effectively elevating Xi to Mao-like status, the Communist Party is wrapping its own legitimacy in Xi’s cult of personality even more tightly, making it near-impossible for rivals to dislodge him.

Still, there are at least two other “Ps” that also matter. The first is the public, which for now appears to broadly support the CPC. To be sure, there are glimpses of discontent over Beijing’s mismanagement – and not just in social media circles where outfoxing censors has become something of an art form. Doctors in Wuhan haven’t stopped speaking out about the government’s suppression of information about the virus. An exceedingly tone-deaf speech given by Wuhan’s party chief calling for a “gratitude education campaign” for the city’s residents ahead of Xi’s inspection tour had to be buried by censors after earning so much backlash. And leaked videos showed Chinese Vice Premier Sun Chunlan getting showered with insults from quarantined citizens during her own visit to Wuhan. But this has yet to translate into any sort of mass movement on the streets.

This is, in part, because the country has been effectively in lockdown. (Indeed, the digital systems put in place to combat the spread of the virus will be useful in combating attempts to mobilize against the government going forward.) It’s also because there’s no prominent opposition figure or party to rally around. (This is why any signs of a major split in the PLA or Politburo would be so important). But the power of the state’s messaging machine shouldn’t be dismissed. Propaganda is more effective when it contains nuggets of truth. Beijing can reasonably point to the lockdowns in Italy and elsewhere to make the case that its own response was within bounds, and it can point to the severe shortage of medical masks, testing kits, hospital beds and so forth in places like the U.S. to make the case that, whatever its flaws, the CPC’s model of governance is superior to Western democracies in a crisis.

The War Isn’t Over

The other “P” is prosperity. Breakneck growth was already becoming impossible to sustain. In February, the economy effectively ground to a halt. As many as a third of Chinese businesses remain shut down, with many more operating at only partial capacity. As was made clear by anemic credit growth figures released this week, Beijing’s chronic struggles with getting liquidity to small and medium-sized businesses– which account for as much as 80 percent of employment in China, and more than half of which say they can’t last two months on their savings – persist. Even “shadow banking” hit a three-year low in February. This is good news for Beijing’s long-term battle against reckless lending, but it’s bad news in the current environment.

We’ve noted that China would be reasonably well-positioned for a “V-shaped” recovery once it could contain the virus enough to restart its manufacturing engine – that is, so long as it could keep systemic risks in, say, the financial or property sectors from rupturing. That’s basically what happened following the SARS epidemic in 2003. Once people can actually get back to work en masse, it won’t be hard to rev up Chinese factories and services sectors.

The pace of the recovery will therefore depend primarily on demand. Massive stimulus spending and the state sector will help here. But with the mass, short-term loss of wages likely to drag down domestic consumption for at least a month or two more, external consumption will once again be the key.

This is why the global spread of the crisis is such a problem for China – especially since it’s happening at a pace that’s likely to last months and may surge again in the fall. Prolonged disruptions to trade would be bad enough for Chinese exports, which dropped more than 17 percent in January and February alone. The more European and the U.S. economies slow down, the more Western demand for Chinese goods will dry up. In this light, “doomsday scenarios” like the one put out by the United Nations predicting a $2 trillion hit to global gross domestic product somehow seem optimistic. 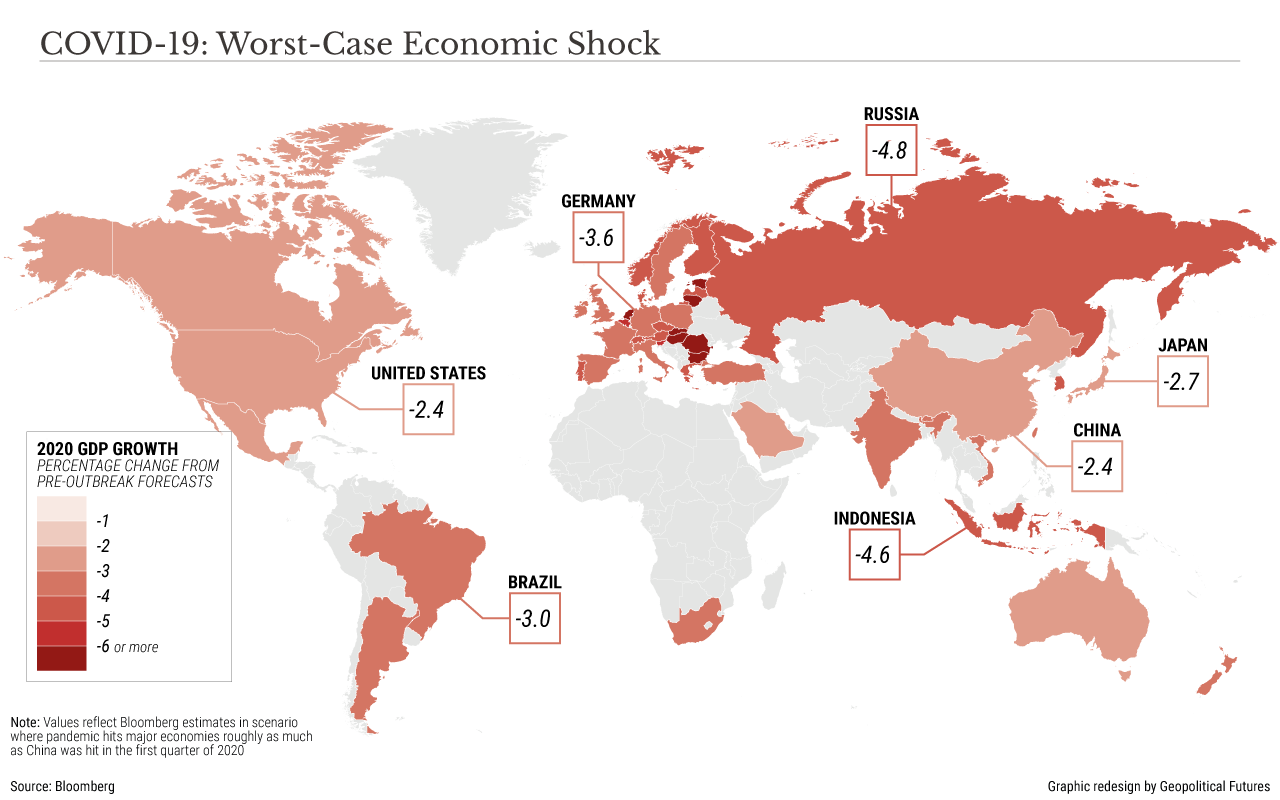 Meanwhile, stress on financial markets in the West – combined with the likely boost to anti-globalization political forces and the broad awareness among multinational corporations that supply chains have become overly dependent on China – will blunt investment and capital flows into China. Despite China’s impressive capacity to screen just about everyone for the virus at just about every factory door or airport gate, it’s not impossible for the virus to come back. Additional mass quarantines, of course, could be incalculably disruptive. (One silver lining of the global slowdown for Beijing: The collapse of oil prices will have mixed effects on the Chinese economy, but on the whole it will do more good than harm.)

For almost a decade now, we’ve been waiting for the next big shock that would test the resilience of the CPC-led system. The assumption has been that the most likely shock would come from external forces. Turns out, the shock came from within, spread to the rest of the world and now looks likely to boomerang back. There’s nothing China’s propagandists can do about it.