This article was originally published by Geopolitical Futures and is reprinted here with permission.

In 1992, during a visit to Inner Mongolia, Chinese leader Deng Xiaoping quipped: “The Middle East has oil, China has rare earths,” referring to 17 elements on the southern end of the periodic table that are essential to the manufacturing of everything from light bulbs to smartphones to fighter jets. China indeed has rare earth metals, oxides and permanent magnets in spades, as well as a preponderance of the world’s rare earth refining operations. As recently as 2010, an estimated 97 percent of rare earths came from China. And Deng, who made rare earths a central part of his plans to turn China into a high-tech powerhouse beginning in the mid-1980s, saw this as “of extremely important strategic significance,” calling explicitly for China to fully exploit this advantage.

Subsequent Chinese governments in Beijing have never seemed quite sure of how to do so. But last week, the Financial Times reported that Chinese officials were investigating whether a ban on exports of certain rare earths could cripple U.S. production of F-35s and other weapons systems. A few days later, Bloomberg reported that Beijing was considering a ban on rare-earth refining technology. China’s hawkish state-owned Global Times then saidsomething to the effect of, “We’re not threatening export controls, except maybe we are.” Curiously, on Friday, China announced a 27 percent increase in rare earths production quotas.

China has periodically threatened to weaponize its dominance over the rare earths industry by banning exports in such a manner. It’s rarely followed through, though, and its export controls have often backfired. But Beijing may be facing a “use it or lose it” moment since, one way or another, China’s stranglehold on the industry is coming to an end.

The first thing to understand about rare earth elements is that they’re not particularly rare. They can be found in vast quantities throughout the world, including in the countries most worried about Chinese dominance over the industry. The United States and Australia have more than enough untapped reserves to be self-sufficient. In a single deepwater discovery in 2013, Japan found enough rare earths to meet its needs for centuries (provided it can find a cost-effective way to extract them, anyway). 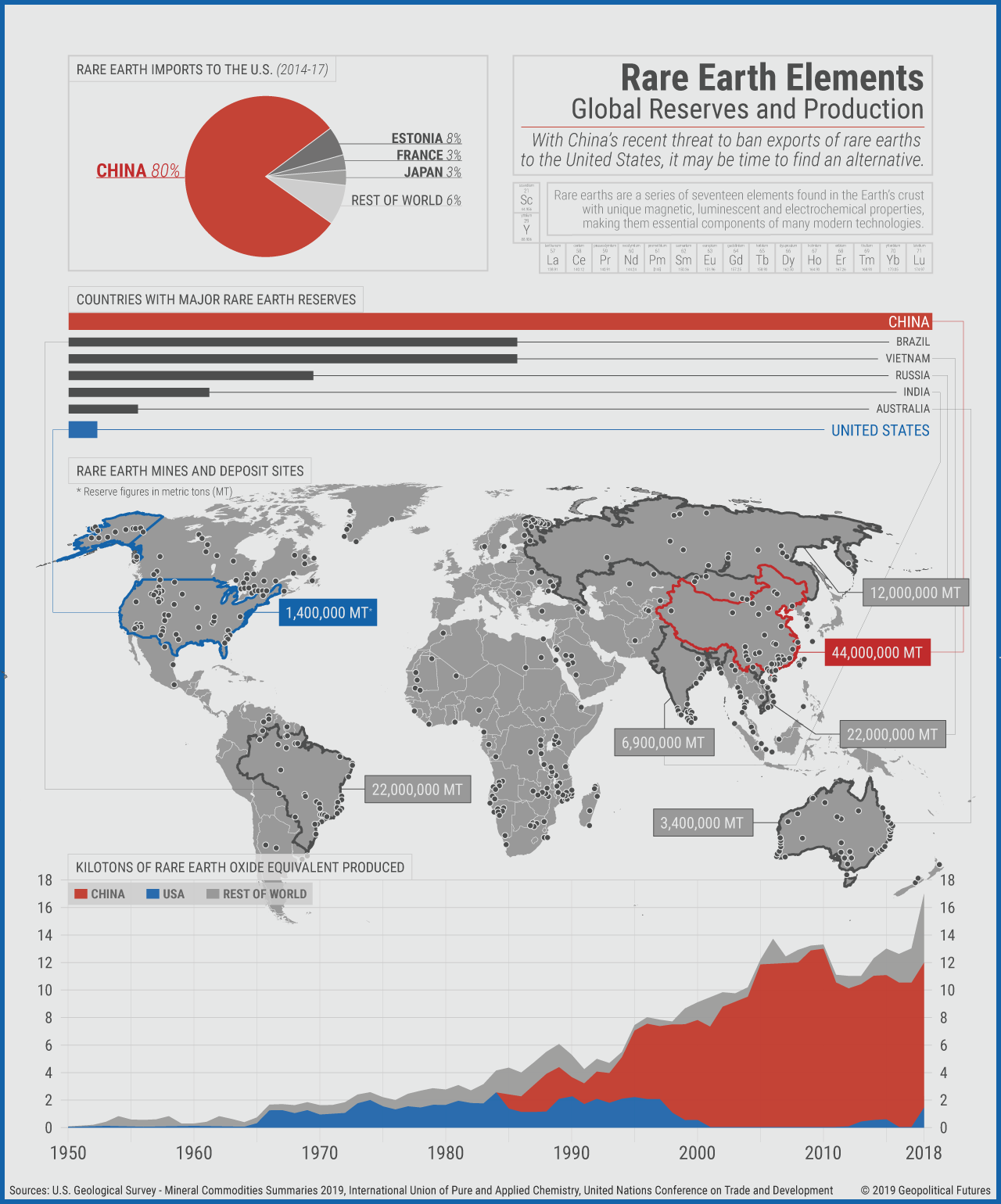 However, mining operations are exceedingly rare outside of China. Australia is the world’s second-largest producer, and it didn’t have an active mine until a decade ago. There’s only one operational mine in the U.S., and it’s been mothballed more often than not since the end of the Cold War. 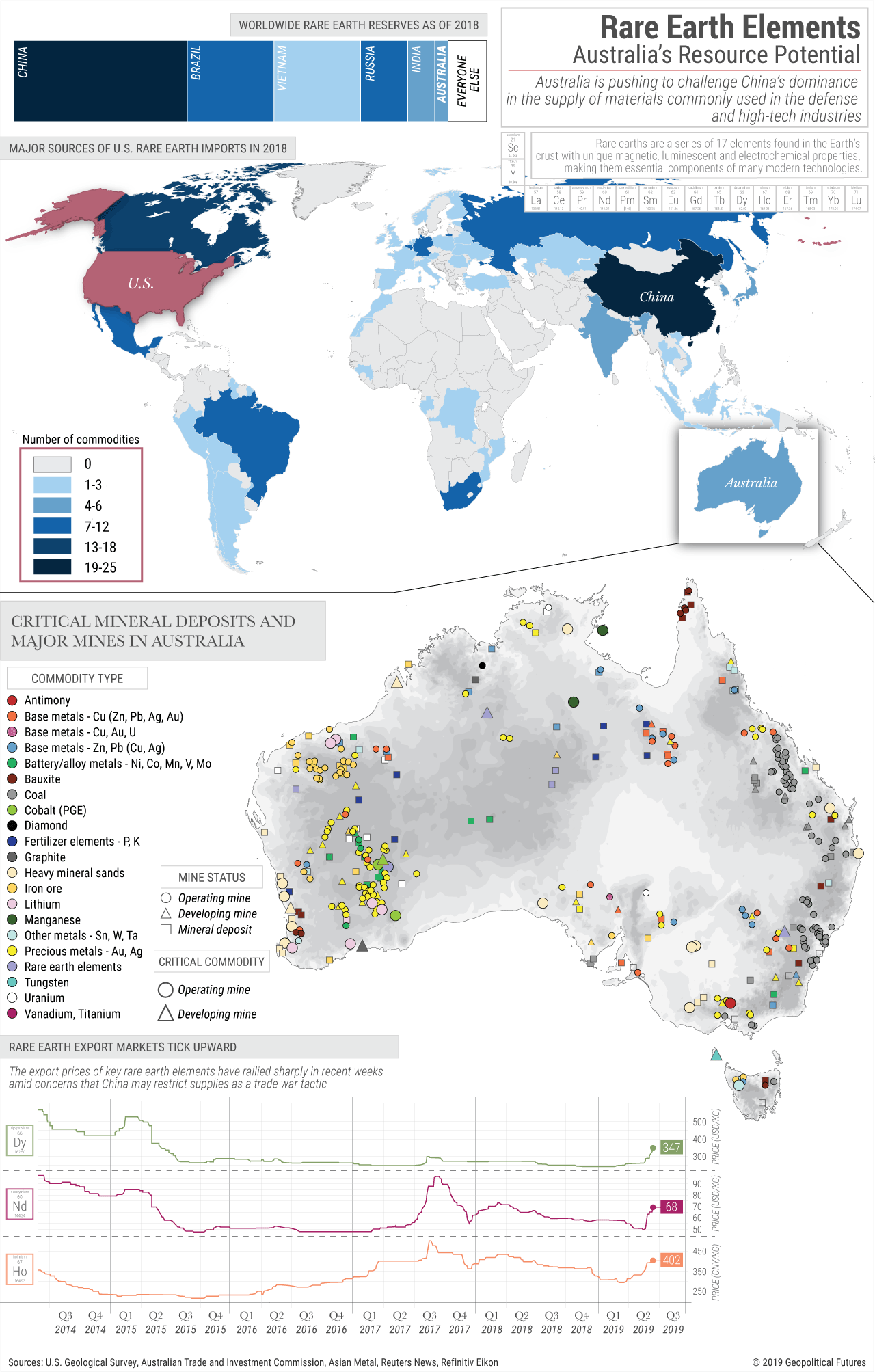 Rarer still are rare earths processing operations. Refining rare earths is expensive, complicated and environmentally (and thus politically) problematic. The only major processing plant outside of China is a facility in Malaysia run by Australian rare-earth developer Lynas, and production there has routinely been bogged down by regulatory and political issues. When immense state support began to pay off in the form of Chinese vertical consolidation over the industry in the early 2000s, no one put up much of a fuss, in part, because no one wanted to deal with the headaches of trying to process rare earths themselves.

But rare earths play a role in nearly every aspect of geopolitical competition among modern-day powers. They’re used in hard drives, in telecoms infrastructure, in oil refining, in nuclear rods and wind turbines, and in missile guidance systems. A single F-35 requires some 920 pounds of rare earths elements, according to the Pentagon. An Ohio-class submarine is built with 9,200 pounds of them. China’s dominance over the REE supply chain was always going to generate alarm eventually.

And this is precisely what happened in 2010, starting with, of all things, a ramming of a Japanese coast guard vessel by a Chinese fishing boat (one of its infamous “maritime militia”) around the hotly disputed Senkaku Islands. Amid the bilateral turmoil that followed, China abruptly slashed its rare earths export quotas by around 37 percent. Japan, China’s largest rare earths customer, naturally saw the worst of the supply chain disruption. Whether or not Beijing was actually retaliating – there’s some reason to think China’s imposition of export quotas was already planned and driven by domestic need and other routine commercial factors – what matters is the move was widely perceived as a retaliatory embargo. It brought global attention to the issue and drove prices up, sparking a rush among major consumers to stockpile reserves and diversify sources.

In 2014, the World Trade Organization ruled against China’s export quotas, and China removed them a year later. Ironically, this arguably served Beijing’s interests, as the surge of Chinese exports flooded the global market, gutting prices and wiping out a number of Western firms that had sprouted up after prices spiked in 2010. But if the goal was truly retaliatory, it’s hard to characterize China’s restriction of exports as beneficial. It didn’t do much damage to Japanese industry, which found ways to get what it needed through re-exports of rare earths from third countries. And global concern about dependence on Chinese weaponization never fully dissipated. Some new diversification efforts survived, particularly between Australia and Japan, so China never fully recovered its near-monopoly on rare earths production. (Today, the share of global output produced by Chinese mines has dropped to around 63 percent, while China’s share of processed rare earths has dropped to around 80 percent.)

Use It or Lose It?

Over the past few years, Beijing has continued to probe for opportunities to leverage its rare earths dominance. For example, following a highly symbolic visit by President Xi Jinping to a rare earth facility at the height of the trade war in 2019, the People’s Daily explicitly threatened to cut off rare earth exports to the U.S. They were included in 25 percent retaliatory tariffs imposed by Beijing days later.

If Beijing is ever going to make good on its threats of a full embargo, it may be better off doing so sooner rather than later. Supply chain diversification efforts by outside powers have been picking up steam, putting Chinese leverage on a long-term downward trend. There are a half dozen or so processing projects in the works in the U.S. alone, including a Pentagon-backed heavy rare earths separation facility in Texas involving Lynas that received final approval in January. There’s also been a flood of money into recycling and stockpiling projects, as well as into research on more environmentally friendly refining processes. Japan has already proved that such efforts can be successful; its cooperation with Australia has reduced its dependence on China by more than a third. Whereas in the past China has often been able to shut down these kinds of diversification efforts by flooding the market, soaring global demand for rare earths and rising strategic impetus to subsidize non-Chinese supply chains are likely to make operations outside China more financially viable going forward.

Ultimately, Chinese domestic needs are likely to be the main driver behind Beijing’s rare earth export policies. In some ways, this portends continued restraint from Beijing, which is leery of doing anything that could end up roiling its own economy. The bulk of Chinese rare earths exports return to China at some point as components for electronics and advanced machinery that China needs to keep its other export sectors humming and to continue its climb up the manufacturing value chain. The potential impact of an embargo directly on the Chinese rare earths sector and all the many sectors that depend on rare earths could leave tens of millions of people out of work.

Over the longer term, it also portends a decline in Chinese exports that has nothing to do with Beijing weaponizing its industry dominance. Chinese domestic demand for rare earths is already exploding. If Beijing is going to deliver on any of its many technological moonshots – such as making the vast majority of its vehicle fleet electric by 2035, reaching 1,000 gigawatts of wind power generation by 2050, and building out the missile, submarine and air power capabilities needed to reach military parity with the U.S. – it will need to hoard most of its rare earths for itself. Chinese exports have already declined as a result, including a 24 percent drop in 2020 from the previous year. Indeed, Chinese demand has outpaced Chinese mining production for the past five years, forcing China to import increasing amounts of raw material from Myanmar, Vietnam and even the U.S. This, more than any desire to ease global concern about a potential embargo, is the main reason behind Friday’s expansion of production quotas.

Deng Xiaoping may have been correct that rare earths, like data and semiconductors, are the “new oil.” The thing about oil is that the strategic value of having a lot of it has often been overstated, especially once it became cheap and easy to move around the globe. Supply disruptions from major producers, of course, can still cause enough short-term pain to make importers leery of doing anything that might provoke them. And, if backed into a corner, China may very well think it has little to lose by rocking the global rare earths market with an export ban. But any benefits of such a move would be short-lived and expensive, and it would quickly bring about a future where production of the elements outside of China is anything but rare.