What the EU’s Green Deal Means for Europe and Russia

Last week, the European Commission announced that it will unveil in July a dozen climate change policies meant to ensure that member states meet the targets of the EU’s Green Deal program. The goal of the program is to cut greenhouse gas emissions by at least 50 percent (compared to 1990 levels) by 2030 and to become climate neutral by 2050. The new regulations will likely target transportation and industry, sectors that have fallen behind on emissions reductions. The announcement came a week after the European Parliament formally approved the EU’s multibillion-euro fund to support communities that will be most affected by plans to curb fossil fuel-intensive industries.

Implementation will fall mostly to member states, many of which will struggle to apply the ambitious new policies. Implementation will therefore likely be a slow and uneven process, considering that countries need to balance between Brussels’ green goals and the socio-economic needs of their citizens. The Green Deal also has broader implications for the bloc. It could increase division among member states and reshape Europe’s relationship with Russia, currently a major energy provider for many European nations. In the long term, the program has the potential to remodel member states’ relations both with each other and with Europe’s eastern neighbor.

The EU’s current target is to get roughly 33 percent of its energy from renewables by 2030, up from 19.7 percent today. However, to cut greenhouse gas emissions by at least 55 percent by 2030 – as charged in the Green Deal – the EU needs to develop new ways to cut its emissions, which is why the European Commission’s policy proposals are so ambitious. But as things stand, the EU will face major hurdles in implementing its plans.

The use of renewables varies significantly across sectors. For instance, in 2019, renewable sources of energy accounted for 34 percent of total electricity consumed in the EU but only 9 percent for the transport sector. Considering that emissions in this sector have been scaling upward over the past decade, it has been an obvious target for European efforts to reduce emissions. The EU wants to substantially increase the number of electric vehicles on European roads by 2030. The commission is also considering establishing “target-based measures” to encourage the use of hydrogen-powered vehicles in transport businesses that will find it hard to make the switch. 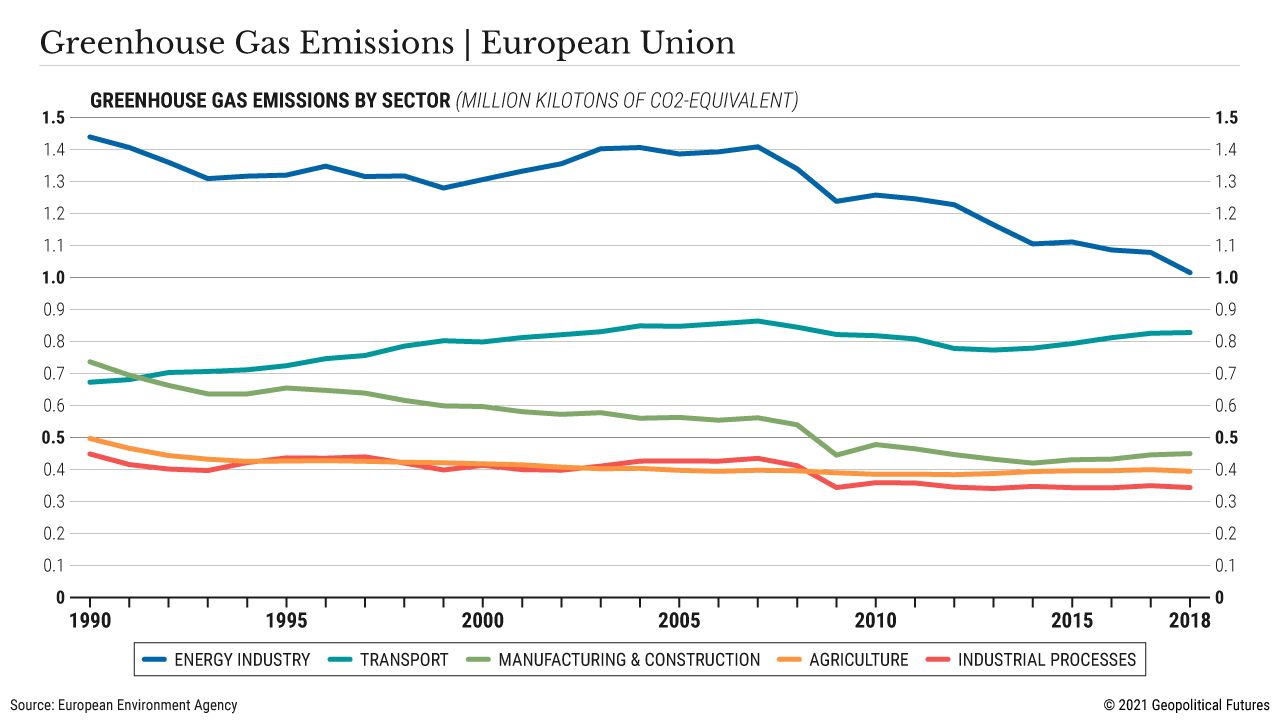 Green technology is already in use in many areas. Wind and solar energy is in widespread use, and electric cars are increasingly common. The problem is that some of this technology is in the early stages of development. Indeed, fossil fuels are still the primary source of power for two main reasons. First, this technology has been in use for decades and is therefore cheaper to produce and, in most cases, cheaper to consume. Electric cars, for example, are more expensive than fossil fuel-powered cars.

Second, the physical infrastructure needed to apply renewable energy in daily use is still being developed. An electric car uses a battery, which needs to be charged. And even though the number of gas stations in Europe that have charging stations is growing, they are still insufficient. To meet the targets set out in the Green Deal, governments and corporations need not only to invest in green technology but also to make it accessible so that people can actually use it. In effect, we’re talking about a complete reindustrialization of the EU – a process that will take time and a lot of resources. 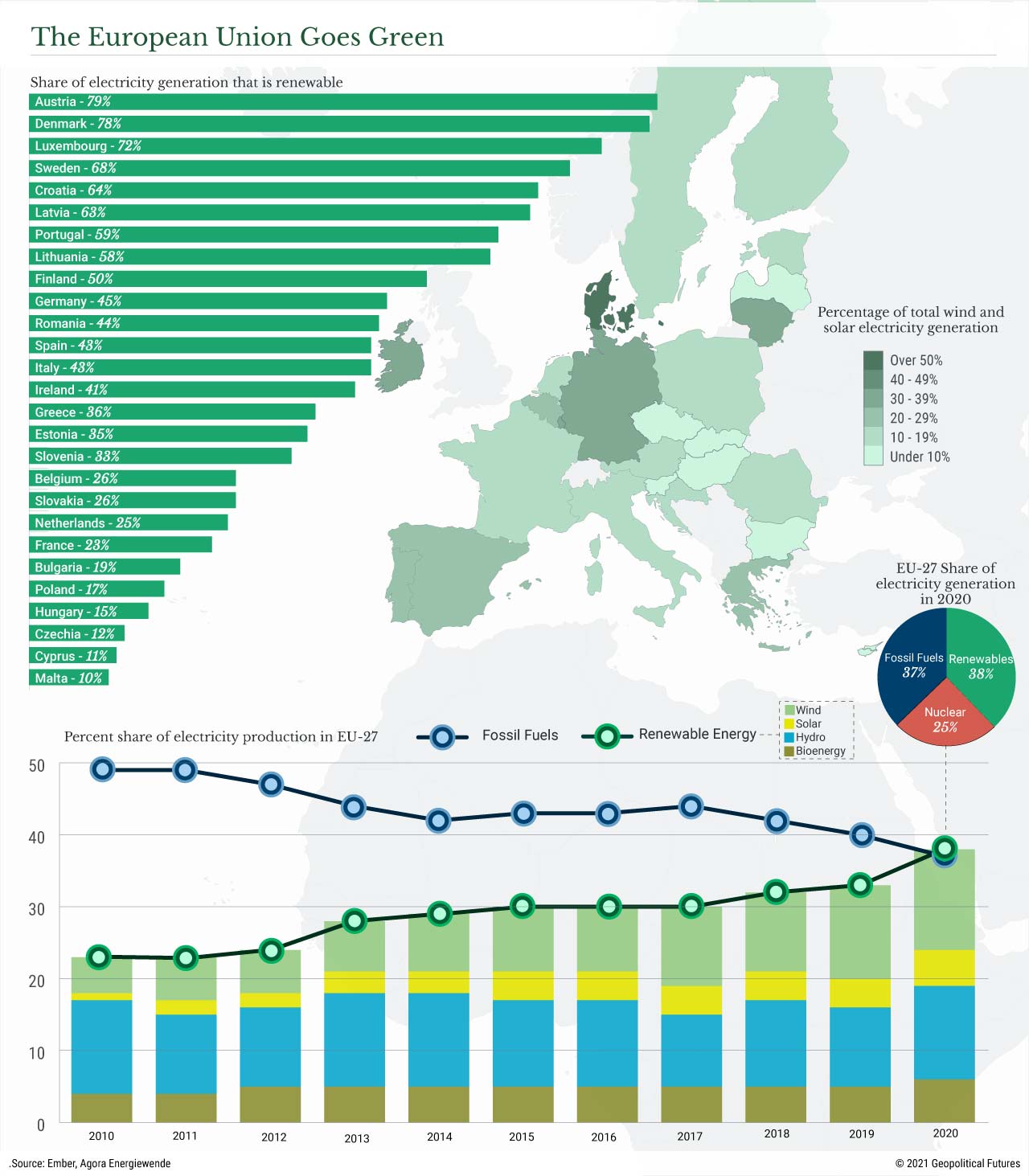 Considering that supply chains are highly integrated, no sector or market can be examined independently. Take Germany’s auto industry, for example. A recent study conducted by the Ifo Institute and commissioned by the German Association of the Automotive Industry estimates that the switch to electric-powered vehicles will cost some 178,000 jobs by 2025 and 215,000 jobs by 2030. (Even if, as estimated in the study, 75,000 workers retire by 2025, more than 100,000 workers will still lose their jobs.) But this study focuses only on the effects on the German workforce. Many German companies, including Mercedes, BMW and Volkswagen, have outsourced part of their production, often to facilities located in Eastern European countries like Poland, Slovakia and Romania. If we include the job losses in these countries, the negative effects would obviously multiply.

The only way the labor market could absorb these kinds of losses is if a large proportion of European consumers start buying electric vehicles. Considering that these cars are still fairly pricey, and that government incentives to buy them are currently minimal, most Europeans will probably not be able to afford them. (In addition to the costs, there are also safety concerns over the batteries and electrical systems in e-cars and how they would hold up in a major accident.)

The EU will need to consider ways to retrain and requalify the workers in the auto industry and other energy-intensive sectors who may soon find themselves jobless. This is no easy task, in part because the skills acquired in one industry may not transfer to another and in part because there’s no guarantee that new jobs will appear in the locations where they’re needed most.

The EU doesn’t seem to have prepared for these broader changes in the job market. It may be hoping that the member states will handle the problem, considering that unemployment is usually an issue dealt with on the state level. It has, however, taken steps to alleviate some of the impact on fossil fuel-producing communities. On May 18, the European Parliament formally approved the EU’s 17.5 billion-euro ($21 billion) Just Transition Fund, which will support countries in their efforts to reduce their emissions. It will target communities most affected by plans to shut down the coal, peat and oil shale sectors and related industries. It’s also meant to help countries relaunch their economies after the pandemic. The fund combines cash from the EU’s budget and its COVID-19 recovery fund.

There are restrictions on how the funds can be used, however. The money cannot be spent on nuclear energy or natural gas projects, no matter how climate-friendly they may be. The lack of support for gas infrastructure and production appears to contradict the commission’s previous position on European gas, which was considered a key option for reducing Europe’s dependence on Russian gas. This is a result of the fact that no EU member state is a major natural gas producer. (Small producers like the Netherlands and Romania were unable to make a convincing case.) But considering that gas is still accepted as a “transitional fuel” under current legislation, it will continue to be part of Europe’s energy framework for decades to come.

The fund is also meant to encourage the transition away from the coal industry. Regions that apply for the funds must submit plans detailing how they intend to manage mine closures and retrain personnel involved in the coal industry. Over half of the roughly 230,000 people working in Europe’s coal sector are employed in Poland. But Poland will receive less than this proportion of the funds – just half of the total – because it hasn’t agreed to become climate neutral by 2050. The Polish region of Turow may not benefit at all after the European Commission warned Poland that its plan to extend the life of its Turow coal mine to 2044 could cost the region its share of the money.

The EU has long said it wants to wean itself off Russian energy, and the Green Deal seems to deliver on that front. In fact, the Green Deal has two major implications for Russia.

First, European demand for Russian fossil fuels will decrease. Oil and gas revenues account for a huge part of the Russian budget (46 percent and 39 percent in 2018-19, respectively). In 2020, oil and gas collectively accounted for just 28 percent of the budget. About 45 percent of Russian fossil fuel exports go to the EU. Russia might lose a significant market share to competitors whose oil production has a smaller carbon footprint, such as Saudi Arabia.

But as far as natural gas goes, Russia could actually benefit from the Green Deal. A significant reduction of emissions by 2030 demands that the use of coal be rapidly phased out, which will result in an increased demand for natural gas. This will allow Russia to grow its short- and medium-term gas exports and complete Nord Stream 2.

Russia saw this coming. Not only have companies like Gazprom been vocal about the environmental benefits of their natural gas, but they have also prioritized technological restructuring. Russian companies are transitioning to low and zero carbon technologies and to new types of energy such as hydrogen, which may partly replace fossil fuels someday and be exported to Europe. (Under the Hydrogen Strategy approved by the European Commission in 2020, hydrogen is expected to account for 14 percent, up from 2 percent, of Europe’s energy cocktail by 2050. A Russian strategy is currently being drafted.)

The second challenge Russia faces is that non-energy exports that require a lot of energy to move and produce – metals, fertilizers, other chemicals, etc. – will become more expensive, especially as the EU introduces a carbon border tax, which taxes the volume of emissions caused by the production of imported goods. Even so, it’s possible that this, too, could benefit Russia, considering all the metals and minerals Europe will need to import to develop solar panels, lithium-ion batteries, fuel cells and electric cars.

Notably, the EU is also considering using 10 percent of the climate action funding – funds under the Multiannual Financial Framework and the Next Generation EU program, or the EU post-COVID-19 recovery fund – to internationalize the Green Deal. This would effectively make the Green Deal a foreign policy tool in that Brussels could provide aid to trade partners in the form of grants, loans and guarantees for transitioning to “sustainable” energy industries and restructuring their economies and exports. This raises the possibility for some of the investment to be channeled into joint EU-Russia “green” projects.

The Green Deal was meant to show that the EU cares about climate change. In that sense, it was about protecting promising technologies and securing decarbonization in the long term. But instead of investing in R&D and technological progress to deliver green solutions, the EU is focusing on killing environmental offenders such as fossil fuels and hoping to use the pandemic as an opportunity to support emerging and existing green industries. As with all things Europe, however, not every country agrees on Green Deal provisions because every country will feel the effects of them differently.

And although limiting the negative effects of climate change will unite the Europeans – after all, climate change is certainly a shared problem if ever there was one – the political discourse surrounding its remedies will not. In general, the green political movement has had some success in filling the void left by its center-left colleagues, but common green platforms can also be found in some anti-establishment and populist parties. Green is in fashion mostly because it speaks about change – which is extremely necessary and urgent. However, the way policies translate into practice poses strategic questions, perhaps no more so than with Russia.