Ethiopia’s Future Is at Stake

This article was first published by Stratfor Worldview and is reprinted here with permission.

With a quick negotiated settlement unlikely, Ethiopia’s Tigray war is reaching a critical juncture that will permanently scar Ethiopian society and could potentially collapse the country, raising the risk of diplomatic disputes and even violence elsewhere in the Horn of Africa. Just shy of the one-year anniversary of launching the war against the northern Tigray region in November 2020, Ethiopian Prime Minister Abiy Ahmed’s government declared a nationwide state of emergency on Nov. 2 amid fears the Tigray People's Liberation Front (TPLF) and allied groups were preparing to launch an offensive on Addis Ababa after a series of military advances. Earlier in the day, the Ethiopian capital city’s municipal government gave its residents 48 hours to register their arms and warned them to prepare to defend their neighborhoods.

The TPLF and the allied Oromo Liberation Army (OLA) have made quick military gains over the last week that could enable an offensive on Addis Ababa. The gains are a sudden reversal of events after Abiy launched an offensive to retake parts of Amhara less than a month ago. On Oct. 30-31, TPLF forces seized the towns of Dessie and Kombolcha on the strategic A2 highway connecting the Tigray capital of Mekelle with Addis Ababa. At the same time, the OLA claimed that they seized control of several towns south of Kombolcha on the highway leading to Addis Ababa. Although some of the seizures have not been independently verified, the governments’ reactions suggest significant retreats by Amhara and Ethiopian forces. With the seizures, the OLA and TPLF now control most of the A2 highway to Ethiopia and can use it to help push further southward. The southern portion of the A2 highway is an important supply route into Addis Ababa and southern Ethiopia. 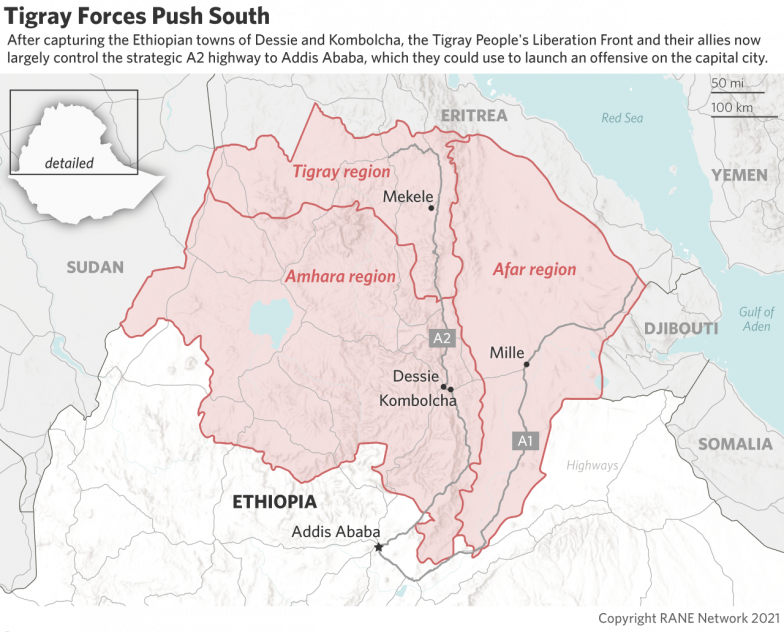 It remains unclear if the TPLF and OLA will try to seize Addis Ababa. But with political negotiations unlikely, the conflict is trending in that direction as the TPLF tries to break the siege on Tigray on the battlefield. The likelihood of negotiations between the TPLF and the Ethiopian government materializing is low, with TPLF officials recently saying that now is not the time for talks. The TPLF and OLA’s military gains since June make it unlikely that they will enter talks without substantial concessions by Addis Ababa. TPLF officials previously made lofty demands that were tantamount to Tigray becoming largely an autonomous region within Ethiopia, which the Ethiopian government is highly unlikely to agree to. Abiy is still heavily dependent on the political support of the ethnic Amhara, who are currently losing territory and demanding more aggressive action against the TPLF.

Should the TPLF and OLA launch an offensive on Addis Ababa, they would face new challenges in securing long supply chains and intense international pressure to stop their advances. The TPLF and the OLA have been able to recruit and have had enough military firepower to push back Ethiopian allied forces from areas close to Tigray, but the further they push south toward Addis Ababa, the more exposed those supply chains will be. This is a new constraint they will have to overcome for an offensive on Addis Ababa to be successful. In addition, some of the residents of towns closer to Addis Ababa may oppose the TPLF’s presence, which could see local irregular militias try to rise up against the TPLF and OLA. Despite these challenges, the TPLF and OLA may consider the strategic gains worth the effort. Prior to a possible assault on the capital, the TPLF appears to be trying to consolidate more control over strategic routes into Addis Ababa. On Nov. 2, the TPLF’s spokesperson said that their forces were closing in on the town of Mille in the nearby Ethiopian region of Afar. Mille is located at a strategic point of the A1 highway, the only highway connecting landlocked Ethiopia to Djibouti. TPLF control of both the A1 and A2 highways would effectively cut off Addis Ababa’s access to Djibouti from all possible routes.

Regardless of who holds Addis Ababa, fighting is likely to continue and spread into other regions, exacerbating tensions along Ethiopia’s ethnic lines that will endure past the current conflict. Ethiopia has a long history of ethnically-motivated violence and the lack of a political solution to the ongoing war portends more bloodshed. The year-long Tigray conflict has already seen atrocities on both sides. A joint U.N.-Ethiopian human rights investigation published Nov. 3 found that all factions of the conflict may have carried out activities that constitute war crimes, including torture, the killing of civilians, gang rapes and arrests on the basis of ethnicity. The United States is also considering formally designating the Ethiopian government’s activities against ethnic Tigrayans as a genocide, although no final decision has been made. The worsening grievances between Ethiopia’s different communities amid the war will only make stabilization of Ethiopia — if it exists in its current form after the conflict — more difficult in the future. Even Ethiopia’s largest ethnic group, the Oromo, only represents a third of the country’s population and is heavily divided.

A TPLF military victory would portend more violence, as many Ethiopians — particularly the Amhara, the country’s second-largest ethnic group — would push back against another regime set up by the TPLF. Despite threatening the capital, the OLA and the TPLF only control a limited amount of territory and may have to deal with a number of restive groups rejecting their legitimacy. The least violent transition scenario might be one where the TPLF and its allies demonstrate that they can take the city, prompting the international community to pressure Abiy’s government to hold talks to avoid fighting in the street of Addis Ababa. But even if this leads to a transitional Ethiopian government, multiple insurgencies may still oppose that government, saying that the Abiy-led government, which recently won June general elections, is the only legitimate government. The TPLF would probably try to resurrect a federalized Ethiopia where significant power is devolved to the country’s regions, such negotiations would take a lengthy period of time.

In the event the TPLF be unable to dislodge the Ethiopian government, a frozen conflict or stalemate would have significant economic, social and political repercussions. Ethiopian military forces appear unable to significantly reverse the military gains that the TPLF have made, which puts significant pressure on Abiy. The longer the conflict goes on, the greater the risk of Abiy ultimately being ousted from power, either through an orderly forced resignation or an effective coup by some of his current allies. In addition to spurring political turmoil in the capital, Abiy’s removal would effectively end his political project — the centralization of power in Ethiopia. A frozen conflict would also lead to more calls by the OLA and the TPLF to push for autonomy or even declarations of independence, which would trigger another conflict with Eritrea as President Isaias would almost certainly reject the notion of independent Tigray.

A scenario in which Ethiopia effectively collapses and the entire country becomes engulfed in civil war also cannot be ruled out. Over the past year, the ongoing Tigray conflict has impacted most of Ethiopia, contributing to nationwide inflation and shortages of basic necessities. The actual fighting, however, has largely remained confined to the Tigray parts of the Amhara and Afar regions. But this could change amid a broader collapse of Ethiopia, with violence likely spreading to places that have so far been spared — namely, the southern and western regions of the country.

The conflict in Ethiopia will reverberate regionally, affecting relations with neighboring countries. Ethiopia is the largest country in the Horn of Africa and serves as a regional diplomatic hub, with the 55-member African Union headquartered in Addis Ababa. A collapse of an Abiy-led government would also collapse the economic integration and political cooperation project between Ethiopia, Somalia and Eritrea would end. Ethiopian rivals Kenya, Sudan and Egypt would all seek to take advantage of an Ethiopia in crisis. Sudan may try to consolidate control over the disputed al-Fashaqa region between the two countries and Kenya may try to expand its influence in southern Somalia. Egypt is likely to try to shape the outcome of the conflict in its favor by supporting groups that it views might be more pliable on its core dispute with Ethiopia: the Grand Renaissance Dam. An Ethiopia in crisis is less likely to finalize the filling of the dam or expand the project.

Many non-African countries also have strategic interests in Ethiopia which will make stabilization and mediation all the more difficult as different outside stakeholders will have different priorities. Traditional Western mediators like the United States and European countries still wield some influence in the region. But the United Arab Emirates, China, Russia, Turkey, Saudi Arabia and India have all increased their ties to the Horn of Africa over the last decade and all have their own interests in what they will want to protect. A disorderly outcome (such as a coup or collapse) would increase fears about the broader destabilization of other regional governments in the wake of this year’s successive coups in Mali, Sudan and Guinea.