up next:
now reading: Puerto Rico: Acevedo Declared Not Guilty 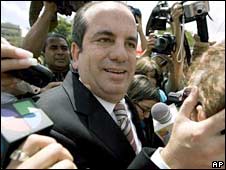 Former governor of Puerto Rico Aníbal Acevedo Vilá has been declared not guilty on all nine counts of corruption after a trial where the defense did not call any witnesses and 10 people indicted with Acevedo had plead guilty before the case went to court.

Here are copies of the original indictment (PDF files) and the second indictment.

The former governor, Aníbal Acevedo Vilá, along with 12 associates, had been charged with participating in an elaborate scheme to pay off more than $500,000 in campaign debts going back to 2000. The criminal indictment made public last March also accused Mr. Acevedo of using campaign money to pay for several family vacations and for $57,000 worth of “high end” clothing.

The trial lasted a month, and though prosecutors called about 30 witnesses and the defense called none, the jury made its decision quickly and unanimously.Manuel Ernesto Rivera, writing for AP, reports,

Authorities last year accused Acevedo and 12 associates of participating in an illegal scheme to pay off more than $500,000 in campaign debts.

One by one the associates began to plead guilty, leaving only Acevedo and Inclan to stand trial. One co-defendant agreed to testify against Acevedo in exchange for having charges against her dropped.

Prosecutors presented some 30 witnesses, while defense attorneys surprised the courtroom earlier this week when they rested their case without calling a single person to testify. Acevedo's lawyers urged the judge to dismiss the case for lack of evidence.

In November, Acevedo lost to Fortuno in his bid for a second term. A month later, Barbadoro dismissed 15 of 24 charges against Acevedo, ruling that U.S. federal prosecutors improperly interpreted election laws.

The AP has a list of Key events in the case against Puerto Rico's ex-governor.

Acevedo, a Democrat, is the only governor to have faced federal charges since the island became a Commonwealth. He lost his bid for re-election last November in a landslide to Luis Fortuño, a Republican who was the island's Resident Commissioner in the US Congress.